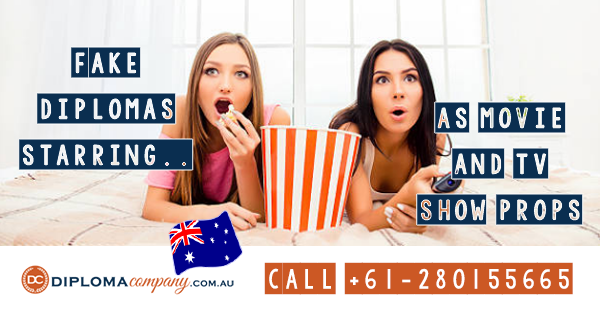 What would Back to the Future be without the Delorian or Crocodile Dunee without his hat? Props used on set can help set the scene and bring a character to life. Fake diplomas used on the sets of your favorite movies and tv shows is really no different.

Imagine this: Your watching your favorite episode of “Rake” and the lead character Cleaver, the  self-destructive lawyer walks into his office. Hanging on the wall a bit out of sight but clearly visible is a diploma on the wall. Why is the diploma there? It’s likely put there by the set designer because most law offices would have diplomas hanging on the wall and if they want you, the viewing audience, to believe that Cleaver’s character can pass as attorney… that prop of a diploma certainly can help.

Why do most diploma props in movies go unnoticed?

It’s rate that a prop becomes a character of a film. Normally it’s something to enhance the scene. Consider the film “Herbie Fully Loaded” when Margaret graduates from college. The character of her dad proudly hangs the diploma on the wall.

Since the main focus of the movie was about Margaret her car Herbie, the importance of the diploma prop takes a backseat. This doesn’t mean that the production team put little energy and time into making sure the prop was of exceptional quality. In fact, we could argue to the fake diploma prop used in Herbie one of the better quality diploma props in the past five years or so. Still, the diploma was not a centralized point of focus for the film’s story. So for this reason, as an audience, we often let the importance of props like this slip us.

How is a Diploma Prop for Shows & Movies Made?

The production and scene being captured play a huge role . If the diploma is being shown from a distance, meaning many of its minor imperfections will go unnoticed, a design department can usually handle the task. If the diploma is going to be filmed or seen up close, all of a sudden, creating a high quality diploma prop is key to making the document feel authentic and legit.

Sometimes studios will turn to professional print shops that specialize in fake diplomas. A few diploma is a carefully recreated reproduction of an actual diploma. A company such as Diploma Company Australia will take a real diploma from let’s say a college in Melbourne and then create an original template inspired by that diploma. The template will capture the layout, structure, font type, seal placement and more of the real document. This can later be used by their production team to create 100% custom made novelty document based on the requested details.

Although fake diplomas are not actual diplomas and degrees are not being issued, buyers typically get these to personally replace lost or damaged documents, fool a friend, boost their self esteem etc. The final documents produced are slightly altered to abide by regulations making them completely legal but still creating a high quality and realistic looking fake.

Businesses such as studios for movies and tv shows see the value of this service when creating diploma props. In some cases they may want them to create a Fake Australia Degrees or they'll request a completely fictitious school name. An example of why they want diplomas from a fictitious institute would be that there putting together a graduate scene and the story mentions a dubious school name.

How can I get more info on fake diplomas?

These days there are a few good sites out there offering these particular services. A lot of times the decision to buy will come down to simple factors like the type of paper they print fake diplomas with or ways you can pay for your order. We would like for you to consider Diploma Company Australia. Our website is online 24/7 meaning you can order at any time. Our support staff is here M-F 10AM-6PM CST and we’re available via email, live chat or by phone by calling +61-280155665. The phone line is a local Australian line for your convenience.

We’ve been in business for over 10 years, becoming the leader in phony diplomas. We hope to hear from you today to discuss your needs and how we may be of service.

James Sonny is the content manager and lead blog editor at DiplomaCompany.com for Australia. He has been with us since 2003 creating posts to social media and overseeing all of our blogs this . As we consider how our ...

Read more »
Related Posts
Is Buying a Fake Diploma Illegal? The Epic Legal Debate!
What to look for in a trustworthy fake diploma supplier?
Related Products
Blog Categories
Recent Posts
Know the Easiest Way to Get a Fake High School Diploma
Buy Fake Degree Online Only From a Reliable Service Provider
Tips to find the Top Provider of Fake Diplomas and Certificates