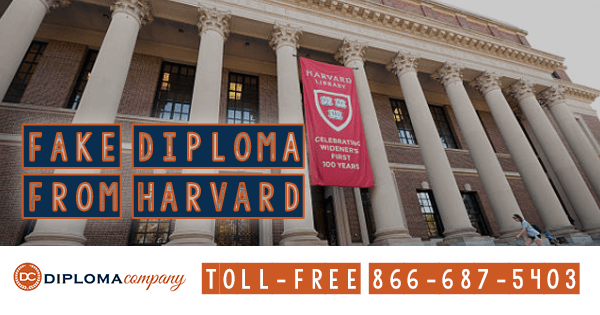 There will always be a percentage of buyers who purchase items like fake diplomas to outwit a friend. Imagine joking that you pulled off something so amazing, so unbelievable, that convincing somebody would be the ultimate high jink. For some, they can’t think of anything more outrageous than presenting what looks to be a 100% legitimate Harvard diploma even if it’s far from it. For this very reason, there are a lot of pranksters in looking for the best fake Harvard diploma that are as authentic-like as possible and can get delivered in their hands quickly while the comedic timing is still fresh.

Since James Ward was the first person to get awarded a Harvard diploma all the way back in 1645, it's been the upper echelon of diplomas! There's no doubt that it's the one diploma everybody wants and few can obtain. To convince somebody, jokingly of course, you got one could be the ultimate hoax this !

There are few people who want a novelty diploma from a fake school like. They want a fake degree from a real university. These days there are a few print shops operating online that offer fake diplomas from colleges and universities. This list for many does include Harvard. Sites like this are able to recreate such documents because they have spent years collecting copies of diplomas, studying their layouts and using that knowledge to create original templates that can later be edited with custom names and dates If a site offer such a novelty Harvard diploma, changes are they have multiple diplomas from Harvard to reference.

The products are sold to consumers as personal replacements, restoration pieces, backups to safeguard originals, as props (more on that below), etc. They are not substitutes for a real degree and hold no educational value, as anybody with commonsense realizes. Yet, if it’s used as a novelty that must fool somebody into believing its legitimate, they are something you should consider if you're in the market for such an item.

How to ensure a fake Harvard diploma looks authentic-like?

Obviously your goal is to capture the format and structure found on a real diploma from the same university. Obviously the layouts will change depending on whether the diploma is for a graduate degree or an undergraduate degree. Yet, many of the classic elements that make a Harvard diploma so special are still there.

The top of the diploma will write out the name of the school. This is always written straight with no curvature. I’ve seen fake diplomas floating around the internet where the Harvard name was curved and this immediately should be a red flag for consumers.

Another myth that causes confusion is that all Harvard diplomas should be written in Latin, not English. Although printing their diplomas in Latin were common tll the 60s, and the change caused a little protest, but as of today almost all their diplomas are written out in English text. From time to time, a novelty diploma sohp will hear customers beg and plead for a diploma from Harvard in Latin claiming it’s a necessity in order for it to look more real. This is absolutely not the case.

Lastly and most importantly is the seal. The seal itself on the real diploma is not in a shiny gold finish but instead a burgundy red color. It basically looks like a series of branches and leaves overlapping each other. Inside the seal are three book icons that spell out the word “Veritas”, which is Latin for “the truth”. Often shops that sell novelty versions of these documents, are argued by buyers who insist on a gold foil seal but the fact is, no gold is used on their diplomas printed these days. The seal included.

As far as signatures go, typically a Harvard diploma such as a Bachelor of Liberal Arts degree has a signature from the President and two Deans. When getting a fake diploma it’s important to know that any signatures displayed are never going to copy or replicate actual school official signatures. This is because no legitimate print will forge any signatures. Instead, any final signatures printed on the fake are replaced with alternative substitutes. Any similarity to actual events or persons, living or dead, is purely coincidental.

Where you might have spotted a fake diploma from Harvard? 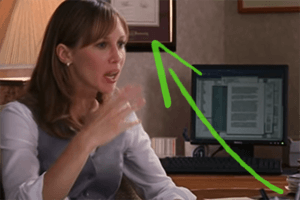 Most people aren't aware that diploma fakes are commonly seen in movies and shows. A good example of a fake Harvard degree showcased in a big Hollywood blockbuster is the classic 2006 thriller, “The Departed”. In it Colin played by Matt Damon is going through a box of belongings owned by Madolyn, a lover and psychiatrist. For a split second, we see him pull a diploma belonging to her from the box. The camera zooms in on a diploma from Harvard. The scene is pivotal in developing Madolyn's character and so the director needed to make sure the fake looked as authentic as possible.

This fake Harvard diploma had Madolyn Madden’s name on it and since we know Madolyn was a character made for the film, it’s proof the diploma was prop or fake by the arts department exclusively for the production. Later on we see another diploma prop hanging on Madolyn’s office wall. The number of fake diplomas used as props, Harvard or not, in this film is impressive.

As somebody watching a scene, props like these diplomas from Harvard and other schools are often overlooked, but they are very common in film and show productions. They can bring a scene to life and help sell us on a character like Madolyn.

A fake diploma from Harvard is not a replacement for a real degree. Let’s get that out of the way first. None of the sites printing these diplomas are operating as legitimate educational institutes. No degrees are being issued by them. No degrees are being granted by them. Contrary to what you may read elsewhere, fake diplomas when used as intended, are 100% legal to own, and are stunning to see when nicely matted and framed and displayed on your wall.

If this sort of custom printed document service is something that interests you, check out the line of fake college diplomas sold at Diploma Company today. For shoppers looking for a fake diploma from Harvard that looks real, we’re suggesting our replica USA college diploma as your first stop to obtaining such a document today.

Although there are a number of options out there for buyers, this site itself offers rush delivery, an unmatched satisfaction guarantee, proof order proofs and more. The site itself is open 24/7 but if you need help we’re here M-F 10AM-6PM CST and can be reached via live chat, email or phone support at 866-687-5403.