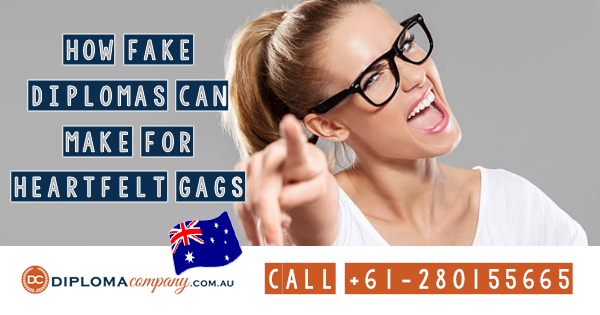 My father Leon Philips attended a college in Brisbane nearly fifty years ago. Due to personal struggles he was forced to drop out of school and the decision has always hunted him. Even though he went on to have a successful career, for his 70th birthday I decided to surprise him with something he’d never expect… a college diploma in the form of a novelty college degree. It was the ultimate heartfelt gag.

Growing up my father spoke little about his time at college. After graduating high school myself and discussed my options, he opened up a bit more about his experiences. He actually attend school to get a degree in business management but when his father experienced health problems he was forced to leave school and leave his degree on the table.

At that time, having a degree was not as important as it is today and so my father was able to find a well paying position. As life continued on he met my mom, have me and my sister and his time at college become just another chapter of his life.

Again as I found myself discussing attending college, he opened more and more about his time at school but eventually we would move onto other subject matters.

Fast forward four years later from the day he would have graduated and now my father Leon is 70. He’s kept up with a few of his classmates from school including Elijah who unlike my father did graduate. It just so happened that Elijah discussed getting a letter from his college about their 40 year reunion, a reunion that my father was unable to attend since her never graduated.

I could see that it deeply distributed him and I wanted to do something truly unique for him on his birthday. It was then that I decided to buy a novelty diploma. Let me explain.

The novelty diploma brought a smile to pop!

I spend some time researching websites that sold novelties of diplomas. A novelty is basically a fake diploma that is captures many elements of the real thing including the document's layout, structure, seal placement and more. Novelties are often used as personal replacements for lost diplomas, as self esteem boosters and specially novelties which was my use case.

The company I did business with called Diploma Company Australia, basically collected some simple details including my dad’s name, dates for graduations (I had to do a little research to figure out when he would have graduated) and more. They created a custom document for me, packaged it up and shipped it out. It arrived at my doorstep in a few days.

What did your dad think of the fake diploma gag?

As you can imagine it immediately brought a smile to my pop’s face. It was certainly a shock because he had no idea there were companies like this that could create such high quality replications of actual diplomas. Yes there were changes made to protect against infringements but the final document looks and felt totally authentic.

In fact my dad showed the diploma to Elijah who graduated from the actual college and he had to take two or three looks before he spotted major differences. He was shocked by the quality.

How as the experience of having the high quality fake diploma gag to your dad for you?

For me it was kind of weird. It was nice to see my dad smile because I know deep down not having a college diploma has always bothered him. I then started to wonder what if he had graduated. Would he never found another career path? Would he have ever met my mom? Would I be here? These were weighing on me but at that moment I was so happy for him.

I am happy that I decided to go with the company that I did. The reality is if the diploma looked fake it may not have ruined the moment but it certainly would not have helped. The staff ensured he they knew about the diploma my dad would have gotten from the school. I guess in the past they obtained a copy and from that they generated an original template. That template is then used by the staff when someone requests a fake from that school, like me, to ensure the capture and structure is spot on.

What if I want a novelty diploma?

There are a few sites out there that offer such products. My favorite is Diploma Company Australia because I can attest to them. They offer a friendly staff whose here to help M-F 10AM-6PM CST. The site is open 24/7 but during normal support hours the staff can be reached by live chat, email or by calling +61-280155665. That is also a local Australian number, if you noticed, which is a nice added touch.

I hope you find this story inspiring and consider this business is you are in need of such services.

James Sonny is the content manager and lead blog editor at DiplomaCompany.com for Australia. He has been with us since 2003 creating posts to social media and overseeing all of our blogs this . As we consider how our ...